Curiosities of the Mosque-Cathedral bell tower 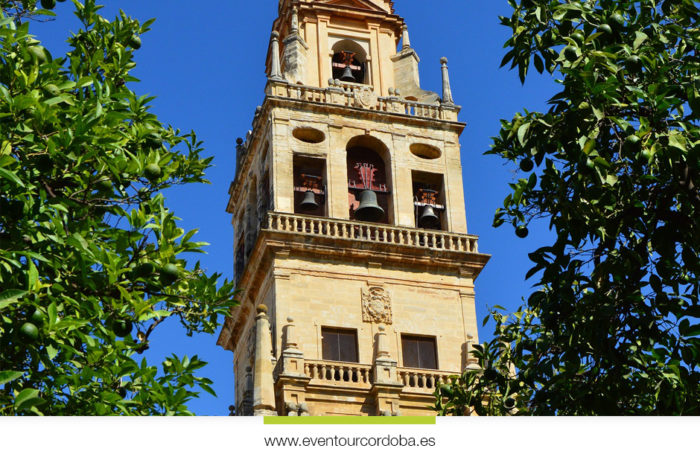 Last posts we talked about curiosities of the Mosque. This post is related with the bell-tower, which was built over the minaret of the Mosque.

Abderraman III built a minaret in 952 in order to have a bigger tower than the other from 788. There are still some remains from the old minaret, one of those is a stamp of the Cordovan Council (the governmental organism of that time).

Today we can appreciate arches on the walls under the bells of the actual tower. which were some of the windows of the arabic tower. The bell tower of the Cathedral was built over the old minaret in 1593, recycling the main structure of the old tower. For that reason, people who visit the tower can see the interior of the minaret. The visit is possible thanks to the last restorations, it was open to public in November 2014.

To visit the bell-tower is worth it not only because you can know the origin of the construction of the Mosque-Cathedral, the minaret. And also because nowadays it is the highest building in Cordova, its height is 40 metres. From the top of the tower you will have the best views of the historical town and you will see the whole city in general. There are big steps and narrow stairs to go up, that is the reason why only small groups can visit it each half an hour and it is very important to follow the rules.

If you want to know more curiosities about the Mosque-Cathedral of Cordova you can do it reading our blog or doing some of our guided visits to the monument.