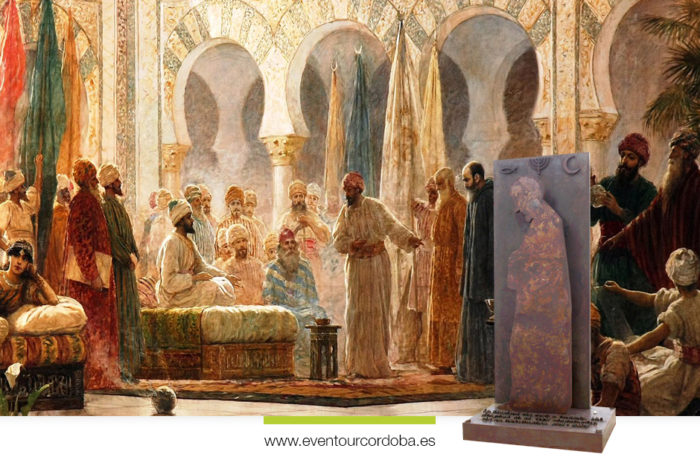 Today we will talk about one of the most influential and fascinating celebrities from the caliphate of Cordova: Hasday ibn Shaprut.

He was born in Jaen (close to Cordova) in a very important Jewish family. When he was very young he travelled to the capital of Al-Andalus, Cordova, where he had a very successful career with the protection of the caliph Abderraman III and later also with his son Alhaken II.

He standed out among the Jewish community and he became an ambassador and the personal caliph’s doctor. He was a renowned translator of scientific and medical works due to his ability with the languages, such as Arabic, Hebrew, Romance and Latin. Speak Latin was very important to communicate with the kings from North Spain. Hasday had financial abilities and he became the Customs boss supervising duties paid by the boats coming and going out from Al-Andalus. These duties were a big amount of the whole income to the caliphate.

As the ambassador of the caliph he organized and attended personally to visitors of great importance in Medina Azahara, like Juan de Gorze, Otto’s ambassador and emissary. The relationship between both kings was not very good due to commercial and strategic interests. It became worse because there were leaks of papers were their respective religions were underestimated. Hasday got the reconciliation thanks to his cunning to succeed in politics. Juan de Gorze told Hasday was a very intelligent and subtle Jewish.

His most famous embassy was when the Queen Toda from Pamplona (North Spain, Christian Kingdom) called him to help her grandson Sancho I ‘the greasy’ because he was so fat that he could not ride a horse and people taunted him. Ordoño IV ‘the bad’ grabbed him the Kingdom of Leon (Spain). Hasday in that situation was to be politician, diplomatic and doctor.

Hasday accepted to help the Queen under the condition that Sancho walked to Cordova and he arrived thinner.

Hasday used drastic measures but the result was successful and Sancho lost weight. Later, troops from Pamplona recovered the crown for Sancho thanks to the Caliphate of Cordova and finally, there was an alliance between both territories. However, this alliance was betrayed by Sancho few years later.

As a doctor he got back the famous Triaca (Theriaca), a medicine against poisons created in Greek Times. The receipt was lost after the Roman Empire fell. His version was the Triaca Magna, recreated by Andromacus, Nero’s doctor. He changed one of the elements, viper’s meat instead of lizzard’s meat. It was better against the snake’s poison, which Abderraman III was afraid of.

There is a street in Cordova with his name, next to the Jewish Quarter and close to the western wall from the old town. This street is close to the old caliphate Alcazar (the palace where the caliph used to live in Cordova), which probably Hasday used to frequent.

If you want to know more about Cordova’s history, visit our blog. Eventour Córdoba tries to promote the culture and to show the history of this city.