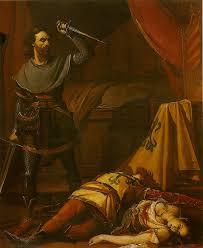 Legend of the commanders of Cordoba or legend Malmuerta tower is based on a historical incident in 1448 in the city of Cordoba.
Fernando Alfonso de Córdoba was one of the most important men of the city of Cordoba, where he was noted for his huge fortune and immense possessions , and also enjoyed the friendship of King Juan II of Castile, Isabella ‘s father , what provided a solid and respectable position in the Spanish Court.

This nobleman was married to Beatrice Hinestrosa , very young and beautiful lady, whom he loved deeply. The lady was respected and admired because of luxury and status they had achieved their marriage. But despite this , the couple had a frustration, and was not having children, which clouded the happiness of marriage.
The chronicles of the time indicate that both spouses did everything possible to achieve progeny , from solemn religious vows and promises to spell Oriental soothsayers and sorcerers spells Mohammedans .

One day he received a visit from two cousins ​​Fernando Alfonso , the commanders Fernando Alfonso de Córdoba and Solier and Jorge Córdoba and Solier , who were brothers of Pedro de Córdoba and Solier , Bishop of Córdoba. Both visitors were knights of the Order of Calatrava , and each of them was a local commander . The commander Jorge Cordoba fell in love with Beatrice and that love soon became an uncontrollable passion. The commanders continued for some time in Cordoba and nothing suspicious was that George had even the possibility of declaring his feelings to the beautiful wife of his cousin, but a completely unforeseen event substantially changed the fate of the protagonists of this story.

The gentleman had to go to court at the request of the monarch of the City of Córdoba. Your stay at the Court stretched and Beatriz letters became less frequent until one day he received a section of a faithful servant urgently requesting his presence in Cordoba for his wife ‘s infidelity with his cousin .

He returned almost immediately to Cordoba where he witnessed the deception and they retaliated by killing two lovers .