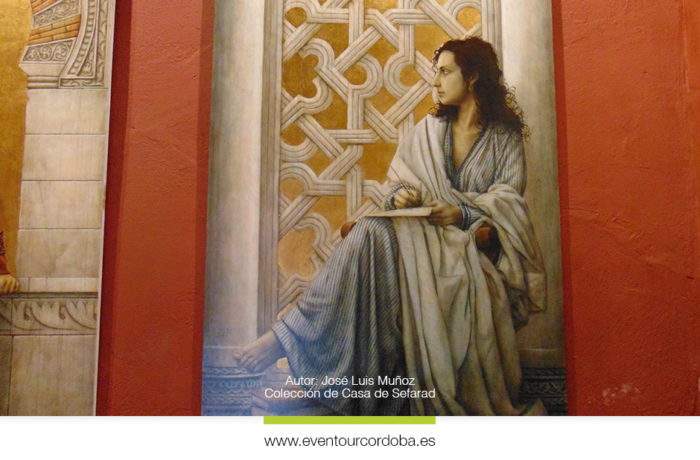 Talking about Al Andalus in Cordova is focus on the Ummayad’s period and the tolerance of the three cultures (Christians, Muslims and Jews), the important Governors such as Emirs or Caliphs and the monuments built at that time. However, it is unusual to talk about women due to the great value given only to men. Fortunately, at present we investigate more and more those women who were very important for our history.

It is not common to read about the daily life of andalusí women. Maybe, people must know about Wallada, the very educated Ummayad’s princess, but over all about her lovers and not so much about her role to promote poetry and literature in a room created by her.

Today, we want to write about a woman who was the personal secretary of Al Hakam II (the caliph). This caliph took the control in the second mid of the X century. His cultural advancement made a very high qualified andalusí society. He met many people from different religions, cultures without caring if they were men or women. For that reason, we will talk about Lubna, an andalusí woman.

There are doubts about her childhood if she born in a modest family of servants or if her father was a copyist who worked at the library in Medina Azahara, where she grew up and she got a job as a copyist in that library. If this was true, she actually became a woman who was promoted because of her capacities and hard job.

She was the personal secretary of the Caliph Al Hakam II and she worked with the distinguished Jew called Hasday ben Sharput being the responsible for the library at the caliph’s palace, where there were around 400.000 volumes.

She was an erudite woman, whose knowledge in grammar, calligraphy and mathematics was highlighted. Her labour as a copyist was excellent as well as her works about the comments that she did to many books that she was translating and copying.

Lubna travelled looking for books to increase the collection of the Great Caliph’s library and she went to many places like Cairo or Bagdad. Women used to be copyists and very well educated, which is important to know the role of women during the Caliphate of Al Hakam II.

After the death of Al Hakam II, this period of tolerance, culture and equality finished. Almanzor destroyed the most important library built by Al Hakam II, where many important books were kept.

Though this period of splendour finished when Amanzor took the power at the end of the 10th century, there were other people like Averroes (XII century) who promoted and appreciated women. He stood up for the equality of men and women, for the education and the culture gave to women and finally, he criticised the role of the woman in the Eastern part of Islam as if they were objects to procreate.

From Eventour, we want to honour through Lubna all those women who had an important role along the history, but they were unperceived. We encourage to people to investigate more about them.