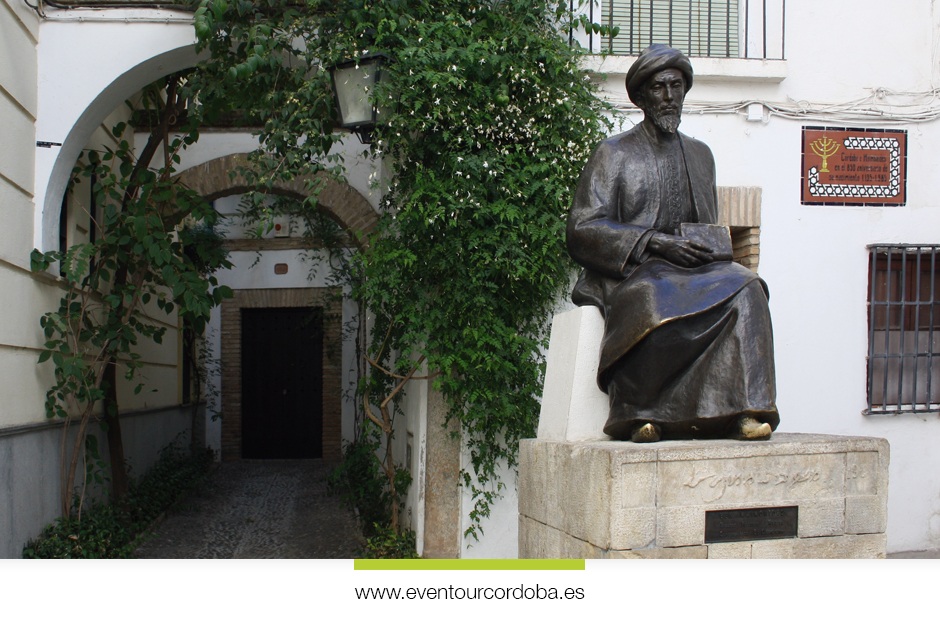 Cordova is known as ‘the city of the three cultures’ because there were three communities from different religions living in the same place. Muslims, Christians and Jews coexisted in Cordova from the 8th century. The jewish culture is the most unknown, although they were who stayed more in the city.

The Jews from the Iberian Peninsula are called Sefardics, because Sefarad was the hebrew name of the territory, which means ‘the end of the world’. The Sefardics were here from Roman times and they lived in the Peninsula until they were expelled by the Expulsion’s Decree of the Jewish ordered by the Catholic Kings in 1492.

More than one thousand years living in the Iberian Peninsula and with the past of time we discover how important the Jews were for the Spanish history. A very rich culture, which legacy persists along the time. From that culture there is a brilliant philosopher who stands out, Maimonides.

Moshé ben Maimón, Maimonides, was born in Cordova in 1135. He was known with the acronym Rambam ‘Rabí Moshé Maimon’. He belonged to a very important family of jurists in Cordova. They left with the arrival of radical muslims. They went to Fez (Morocco), but they also left from there and finally they went to Fustat, the current Cairo, Egipt. In Egipt he became a very important doctor and he worked in the Court of Saladino, who was the gobernor at that time.

He was an advanced doctor, he said that doing exercise and eating healthy people could live longer. He wrote many books and some of them were in relation with nutrition.

He standed out as philosopher and with some of his religious studies such us Mishneh Torah and The Guide of Perplexes. His thought connected religion and reason feeling disciple of Averroes, andalusian philosopher, although he was muslim. Both philosophers had similar ideas and they influenced to other philosophers from Medieval Times until today.

Maimonides died in December in 1204, he was 70 years old, in Fustat, El Cairo. He was buried in Tiberia’s Lake where people can visit his funeral monument.

Maimonides is still one of the most important person in Judaism. In Cordova there is a square with the name of Maimonides and close to that there is another tiny square called Tiberia Square with a statue to honour Maimonides made in the 60’s in bronze by the sculptor Amadeo Ruiz Olmos.

If you visit Cordoba do not miss the Jewish Quarter, we recommend you to do one of our guided visits to it.