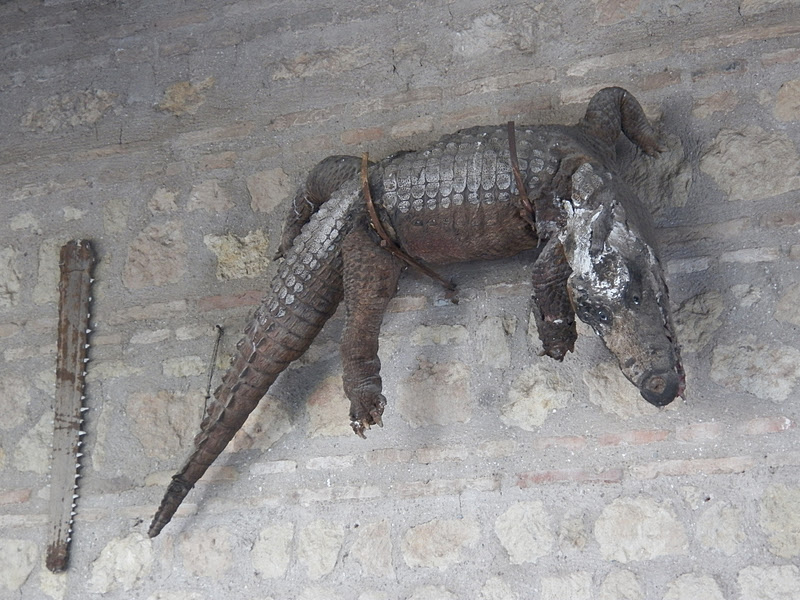 Located in a wall of the Sanctuary of Our Lady of Fuensanta , the origin of this alligator is uncertain due to the diversity of legends about it, but Ramirez de Arellano says the alligator was brought to America by a rib of a whale, shell or carapace of a turtle , saw the fish of that name and a few other things like memory submitted by travelers Cordoba .

One of the most widespread legends that once there was a flood in the river Guadalquivir and the abundance of water brought a fearsome alligator came to sow panic among the population and among Cordoba nearby orchards . The animal stalking its unsuspecting victims, smashed and then disappeared in the nearby reeds. When he was hungry again at work and thus was overwhelmed and powerless until the population decreased physical , lame , decided to end the problem .

It is said that after studying the behavior of the alligator , the stalked and waited in a tree with his crutch and a lawyer bread. Bread gluttony animal awoke immediately opened her mouth to swallow , our hero took time to get off the tree and nail the edge of his crutch on the animal’s throat , who dissected and placed as a votive offering . Another form of the legend tells that the hero was not lame but a death row inmate who was offered a pardon if he finished with the terrible animal that had the population in check .

Since then , during the celebration of Velá Fuensanta , it is customary to go to the temple and see the stuffed body of the alligator.