Curiosities about the Mosque-Cathedral of Cordova 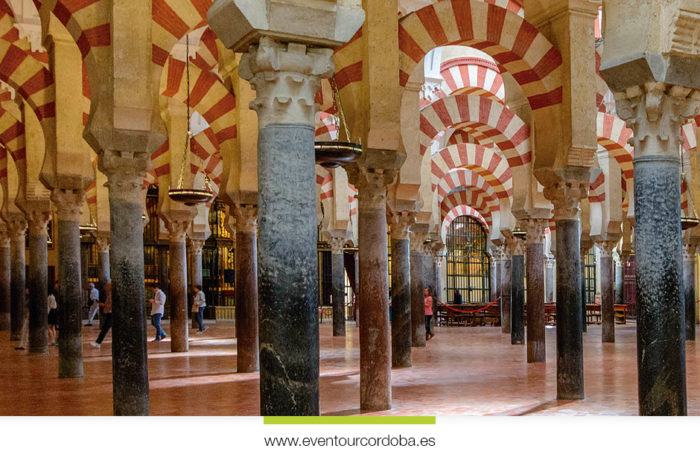 The Mosque-Cathedral of Cordova was declared World Heritage by Unesco in 1984 because it is a singular building. It is unique in the World, not only because of its arquitecture, but also because it has changed with the passage of time. Inside the building you can find the mixture of its arquitecture from different cultures, first used as an Islamic building and then as a Christian temple.

One of the most interesting among the different curiosities is that the Mosque is not facing Mecca, which is the common orientation. It should be facing South-East, but it is facing South. Which is the reason? We do not know the real reason because there is not a document from that time telling why this mosque is wrongly oriented, but we have many theories about it.

As we do not know the real theory, anyone can chose the most logical theory.

We know when Al Hakam II, the califa, built the second expansion in 962 he wanted to change the orientation of the Mosque in Cordova, like his father, Abderraman III did with the others Mosques built in the palace-city of Madinat Al-Zhara. Those Mosques are facing Mecca. Finally, Al Hakam II respected the orientation of the Mosque built by his ancestors.

Whatever was the reason, this curiosity makes even more interesting to visit this monument.

If you want to know more curiosities about the Mosque we invite you to read our blog because you will find more posts about it.

Do not hesitate to join us in one of our visits to the Mosque-Cathedral, which was declared World Heritage by Unesco in 1984 to know more in detail about the monument.