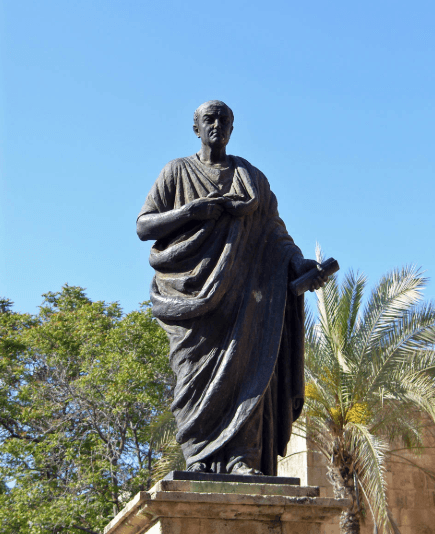 Lucio Anneo Seneca, known as Seneca the joung, he was a very influent man in Rome in the first century. He born in Cordoba in 4 b.C, in the bosom of a patrician family and he died in 65 a.C.

He was a multitalented man who standed out as orator, politician (quaestor, magistrate and senator), writer and philosopher. His thought is part of stoicism, that is, a philosophical current which is concerned with the knowledge to control your soul and not to be influenced by your passions and dreams, which make you to lose control. Stoics proclaimed that life should be regulated with reason to become a good person and to find hapinness in society. Stoics started to value each human being as a member of a universal family. This was a very innovative thought for a period in which Romans had a very slavery culture. This thought was part of the very beginning of Christianism.

Seneca’s work was very influent in different historical periods in which we can see that many important thinkers, such us Saint Augustine, Erasmo from Rotterdam, Calvino or Descartes included Seneca’s ethics, moralism and ideas.

Seneca had a very interesting life. Nowadays he is remembered as one of the most important philosopher. In Cordova there is a sculpture of him made of bronze by Amadeo Ruiz Olmos. It is in Almodovar’s Gate, an entrance from the Roman Wall to the Jewish Quarter.