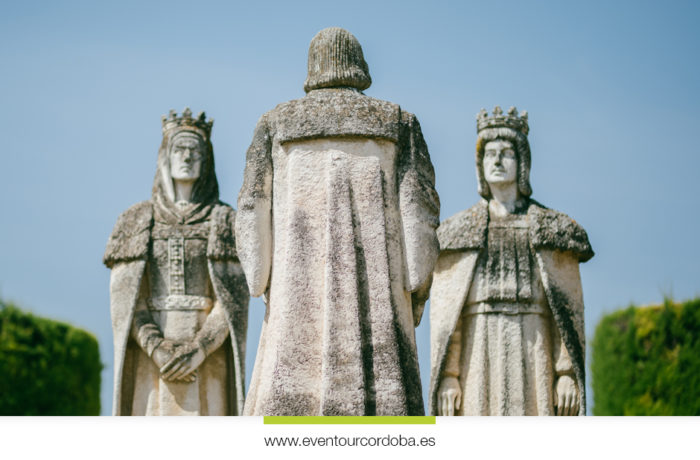 Isabella I from Castilla (kingdom of Spain) and Ferdinand II from Aragón (kingdom of Spain) got married in the Palace of Vivero in Valladolid in 1469. From that momento they were known as the ‘Catholic Kings’ it was an honourable mention from the new Pope Alexander VI in 1492.

They were two of the most influential gobernants from the Spanish history. Due to their territorial conquests, they unified all the different kingdoms in Spain creating only one country. But, they are also very well known because of the financing of the Columbus’ expedition.

Both were the Kings of Castilla and Aragón until Isabella the Queen died. After her death the Kingdom of Castilla belonged to their daughter Juana ‘Juana the crazy’.

Isabella was a descended from Alfonso XI from Castilla, who was in loved with Leonor de Guzmán and they had ten kids. Those children were considered bastards, because Leonor was not his wife, but his lover. At that time, one of his sons, Enrique II of Trastámara fought against the legitimate son Peter the 1st ‘the cruel’. Finally, the bastard won the battle and he started a new dinasty of Kings. One century later, the Catholic Kings travelled to Cordova and they stayed just in the same palace ordered to build by Alfonso XI in 1328, the Alcazar of the Monarch Kings.

At tha time, the Court was itinerant, they were travelling to their different territories. The Catholic Kings stayed in Cordova since 1485 because this city was very close to the kingdom of Granada, which was the last islamic territory in the Iberian Peninsula. They got it in 1492.

The kings lived in Cordova until they conquered Granada. Their daughter Mary born in Cordova. She was the Queen of Portugal. They also met with Christopher Columbus, who wanted to do a shorter trip to India. Finally, he waited until the conquest of Granada and Columbus got money there. He left in 1492 from Huelva, South Spain and he discovered a new world, America.

Isabella the Queen liked to walk through the parapet of the wall in the Alcazar and for that reason many cordovan women used to go to see her. She did not like to see many people gossiping around the Alcazar and she asked them if they did not have to do anything better at home. But, the rest of the people answered her that their husbands worked for them. The Queen became enraged and she ordered a new law ‘The Lazy Law’. That law prohibited to any widow to inherit nothing from their husbands. The law was written only for those cordovan women who liven in the capital, but not for the rest of the province or cities. So people got married outside Cordova if they could. The law was abolished a couple of centuries later thanks to Charles IV.

If you liked this story and you want to know more about the Alcazar of the Monarch Kings do not hesitate and come with us, Eventour, to join us to any of our guided tours to the monument.