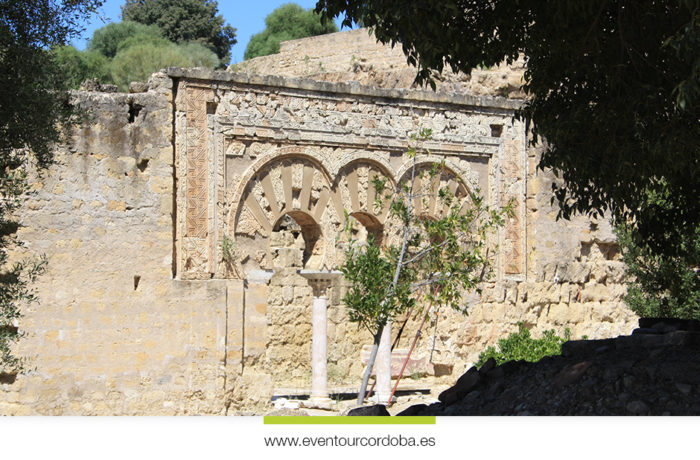 Medina Azahara was ordered to build by Abderramán III, the Ummayad calif in 936. Ten years later, the Court was moved from the capital of Cordoba (Qurtuba) to his new city, Madinat al-Zahra, the shiny city. The question is why having an important city like Cordoba, with excelent infrastructures and palaces, he decided to build a new city close to the capital of the Caliphate.

In Medival times, in the Eastern area of the Islam, when the emir proclaimed himself into the calif, it was very common to build a new palace-city for his own. It was the Ummayads, after being considered inheritors of Mohammed, whom started the trend to build new cities as the main site of the califal authority or any gobernor in new territories to exert the califal power. The calif used to move himself with his family, servants and his court.

What is a palace-city? Constructions built by the gorbernors to promote the power and wealth. Those places should be imagined as idyllic places in which everybody wanted to live. Those arquitectonical paradises live on the memory of anyone.

These cities should be close from the main capital and they were very good defended sourranded by walls to guarantee the security of the gobernor. They had aljama mosques, commercial areas, workshops, servants´houses and main residences for the gobernor, his family and other important dignitaries.

Some of these cities became metropolis such as Amman or Bagdag, but others like Medina Azahara had a short life.

Medina Azahara was ruled by the Ummayads, who ruled also an impire in Damascus (Siria), but there was another family, the Abbasids, fighting against. Finally, the Abbasids took the power and they wanted to kill each member of the Ummayads family. Abderraman the 1st run away to Al-Andalus and he created the Independent Emirate which capital was the city of Cordoba. Abderraman the 3rd proclaimed himself the caliph in 929 and thanks to Medina Azahara, the new palace city, he demonstrated how powerful he was.

Almanzor, a visir who ruled the Goverment of Al-Andalus from the end of the 10th century, built his own palace city to the East of Cordoba. He continued with the tradition building new cities when he took the power. His city was called Madinat al-Zahira, ‘the blazing city’, however, this palace city was not so large and marvellous as the Medina Azahara.

If you want to know more about the history of Medina Azahara, do not hesitate to do a tour with us to it.